A Peek into our portfolders

Have you ever intended to spring clean a room, only to find yourself lost in nostalgia as you page through a yearbook or a journal or a stack of letters?  That happened to me all the time as a teenage girl. It happened again yesterday when I pulled out my girls' portfolders. What a beautiful collection of creativity and learning that reminds me of the good ol' days when learning was rich, fun, practical, contextual, literature-based, spontaneous, personal...(sigh), all the things it's harder to maintain when you have to prepare a transcript worthy of a college admissions team.

When my friend introduced me to portfolders in our early days of homeschooling, she gave our family a precious gift. These projects not only gave us hours of fun and learning then, but they also bring us warm memories now.

What I love about portfolders:

To show you the possibilities for these projects, I will take you on a brief tour of some of ours.  Many of the mini-books come from Dinah Zike's Big Book of Books and Activities. They are noted with italics.

(Note: Since Michaiah is the oldest child, she has more portfolders than the other two. By the time Rebekah was the same age, we moved on to other projects, which I share in Beyond Portfolders.) 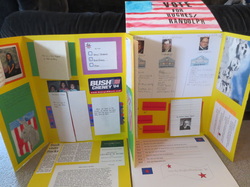 During the 2004 presidential campaign and election, we did a civics unit.

A Peek Inside:
~ Janessa made a bar graph, choosing six names (George, John, James, Andrew, William, Franklin), noting how many presidents we've had with those names.

~ The girls made a podium out of a box, designing it with both their rendition of The Great Seal and their own seal. They wrote and presented a campaign speech. The speech and the picture are included.

~ They wrote letters to George W. Bush, the President at the time, including a copy of their letters in an envelope.

Storm in the Night by Mary Stolz 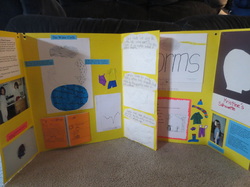 The Storm in the Night was our Five-in-a-Row hub book from which a study on weather, the water cycle, and figurative language was born.

A Peek Inside:
~ We did an experiment to observe evaporation. Michaiah recounted the four-day process and included a picture.

~ She looked for mentions of weather in the Bible, summarizing each of them in a simple stapled book.

~ She included an original acrostic poem with the word Hurricanes. 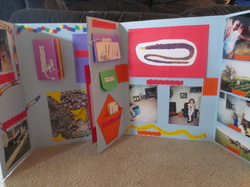 This silly book inspired a unit and a portfolder that taught us about reptiles and farms.

A Peek Inside:
~ Michaiah did the envelope fold. On each triangle, she glued a picture of a snake (blech!).  Her caption says, "Can you identify each of these snakes without lifting the flaps?"  On the inside, she included the name of each snake as well as information about each one.

~ She typed the highlights of the story on sentence strips which fit in a drinking cup pocket.  On the outside, she wrote, "You can try to fit together the story of The Day Jimmy's Boa Ate the Wash by taking the slips out of the pocket and setting them up in the right order."

~ She wrote a cause and effect story of her own and displayed it in an accordion book.

Berlioz the bear by jan brett 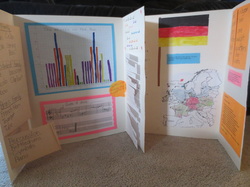 One day I didn't know what to teach next.  I sat on the edge of Michaiah's bed and prayed. When I looked up, I spotted Berlioz the Bear and thus began a wonderful unit on music.

A Peek Inside:
~ Michaiah drew math problems with musical notes on a vocabulary word book. She wrote the answers on the back of each flap and drew a surprise picture of Berlioz for the reader to enjoy when all the problems are solved.

~ On a graph, she wrote the notes of the musical scale on one axis, the words of "The Wheels on the Bus" on the other axis. She then made bars showing the note for each word.

~ She made a key, noting each of the sections of an orchestra--percussion, woodwinds, brass, strings--with a color. She wrote the names of the instruments  in her very best cursive on short sentence strips, identifying their sections with the appropriate color. She then pasted them in alphabetical order.

The Salamander Room by Anne mazer 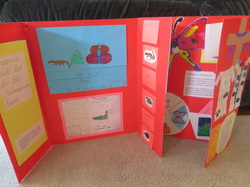 We combined The Salamander Room and Considering God's Creation to make this portfolder centered around insects, amphibians, metamorphosis, and salvation.

A Peek Inside:
~ Michaiah wrote her own fairytale called "The Princess and the Frog."

~ She included a page, describing the process of metamorphosis, in the left pocket of a pocket book. In the right pocket, she displayed the activity from Considering God's Creation which shows the life cycle of six insects. As a decoration on the pocket, she printed a picture of an insect, colored each section in a different color, and labeled the sections.

~ She wrote a series of facts about amphibians on six miniature matchbooks. 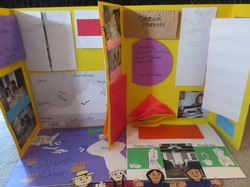 We lingered in our study of American history, since there is no lack of books at the library, and we happen to live where field trips and re-enactments are plentiful.

A Peek Inside:
~ On adding machine tape, Michaiah made a timeline--narrated and illustrated--of Squanto's life. We accordion-folded it to fit.

~ Janessa made a layered look book about the pilgrims. The first layer tells about their time in England, the second in Holland, the third in America.

~ They designed their own flags with felt and foam. 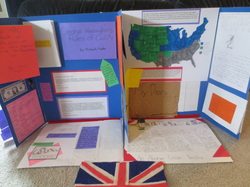 All of the girls' projects would have overstuffed the first portfolder, so they each made a second one.

A Peek Inside:
~ They made ABC bound books.  Michaiah's was about the Revolutionary War, Janessa's about George Washington. These books alone represent hours of work, as they had to figure out what word to use for each letter, write an explanation, and illustrate it.

~ Michaiah wrote another verse to "Yankee Doodle," writing the words and notes on a musical staff.

~ Janessa wrote two letters to King George III, one from Loyalist Lulu, one from Patriot Patty. 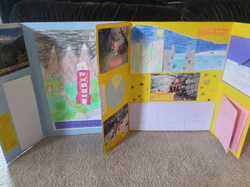 When my girls were 3, 5, and 7, we traveled 3,000 miles from home to spend a month learning with the portfolder creator/queen herself in our home state of Oregon. We created and collected and put all our learning together in portfolders.

A Peek Inside:
~ From the look of the front cover, you would think the girls' Mt. Hood books are nothing special. Open them up to the first page, however, and you find text with a tiny hole in the middle.  Each subsequent page has more text with a slightly bigger hole, allowing a larger peek at a picture which is eventually seen in full on the last page.

~ Michaiah painted a picture of Multnomah Falls, inspired by a postcard she bought. She left room to write a diamante poem.

~ She made a top tab book, outlining the steps a person must follow to thresh wheat, a process she saw demonstrated live at Champoeg Park. 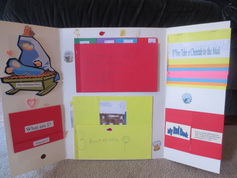 I've taught a number of classes, where the end goal was a portfolder of writing, some of the pieces based on children's literature.

A Peek Inside:
~ After reading I Know What I Like by Norma Simon, the kids made a circle book. Each circle has four sections, three for "I likes" and one for "I don't like" to follow the book's pattern. I won't try to explain more; it's too complicated. : )

~ Teachers get a lot of mileage from Margaret Wise Brown's The Important Book. I joined the crowd.  Students made their own version in a bound book.

~ I asked students to choose three related things: three restaurants, three presidents, three memories, three vacations, three sports.... They made filmstrip books, writing about and illustrating each of their "things."